Go with grapes every day
for a whole bunch of healthy

Science is now revealing what we've perceived intuitively for centuries: Grapes are very, very good for us. Research has shown that grapes of all colors—red, green and black—are a natural source of beneficial components called polyphenols, which help promote antioxidant activity and can influence cell communications that affect important biological processes.

Listen to expert advice on the health benefits of grapes

The role that food and nutrition play in promoting health continues to be an exciting area of study. Explore this section for more detailed information on the intricate and intriguing correlation between eating delicious grapes and maintaining good health.

Simply put, grape polyphenols appear to protect the health and function of our cells.  That sounds pretty basic–which it is–but how these influential compounds accomplish the job is both complex and fascinating. What’s exciting for us is that research indicates that grape polyphenols contribute to a healthy heart and may also play a role in promoting healthy aging and other aspects of health. Today, research is ongoing to uncover even more links between grapes and heart, eye, brain, and joint health, and much more.

Grape polyphenols may help support the health and function of our bodies' cells. Grapes are a natural source of the polyphenol called resveratrol. Studies have shown resveratrol positively influences immune function.

Grapes are healthy and safe

Everyone wants what is best for their health and for the health of their families – especially when it comes to food. Making good food choices is one of the ways we can all work toward a healthier life; eating fruits and vegetables is an important part of that effort. You may have heard about a "Dirty Dozen" list of fruits and vegetables. If so, and if you have any questions about the safety of fresh produce, there are some facts to consider as you make food choices for yourself and for your family.

A 3/4 cup of grapes contains just 90 calories with no fat, no cholesterol, and virtually no sodium. Grapes are also a good source of vitamin K. Grapes of all colors are a natural source of antioxidants and other polyphenols.

These delicious heart-smart recipes are made with heart-healthy ingredients such as grapes, nuts, fish, legumes, leafy greens, and whole grains. Each recipe also contains less than 10% of its calories from saturated fat; has less than 90 mg of cholesterol, and less than 500 mg of sodium per serving. Enjoy!

Enjoy this collection of recipes that may help support brain health! These delightful recipes are made with grapes and other foods thought to help promote a healthy brain, including fish, legumes, nuts, whole grains, and leafy green vegetables. These recipes are also heart-smart, because what’s good for heart health is also good for brain health. Enjoy!

Check out this collection of recipes that support colon health! These tasty recipes are made with foods that may help maintain a healthy colon, including grapes, vegetables, whole grains, nuts, and seeds. Each recipe also contains at least 5 grams of fiber per serving because a diet high in fiber is very important in colon health. Enjoy!

six reasons to Add Grapes
to Your Day 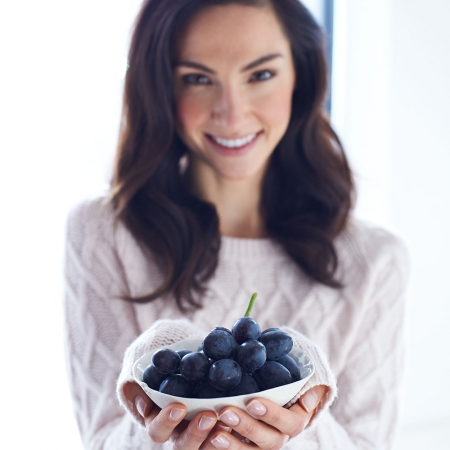 1. Grapes Deliver Antioxidants and Other Polyphenols

Grapes of all colors contain a variety of antioxidants and other polyphenols.   Antioxidants neutralize harmful free radicals to help prevent the process of oxidation that damages cells.  Sounds pretty technical, but in fact, neutralizing free radicals happens naturally when we eat foods like grapes that promote antioxidant activity.  When free radicals are left to their own devices, a condition called “oxidative stress” occurs.  Oxidative stress is now associated with numerous health conditions and chronic illnesses. 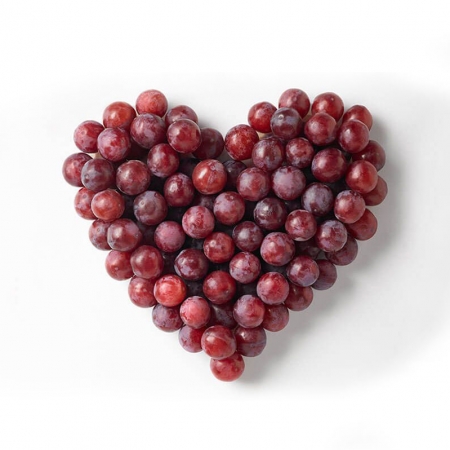 Human studies have shown that eating a variety of grapes may help support a healthy heart by promoting relaxation of blood vessels to help maintain healthy blood flow and function.  Heart-healthy grapes may also help promote healthy aging:  studies looking into the health benefits derived from eating normal portions of grapes on a regular basis are underway at some of the nation’s most prestigious research institutions. 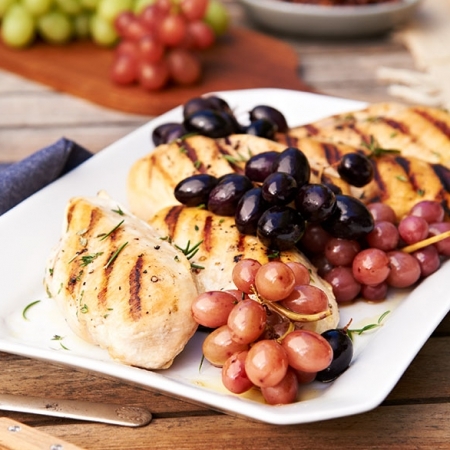 In a recent series of studies1 2 3, animals were fed a salty diet and their blood pressures rose as a result.  When grapes were added to their diet, blood pressure levels dropped, heart function improved, and inflammation was reduced throughout their bodies.  These animals also showed fewer signs of heart damage compared to those who did not receive grapes in the diet. 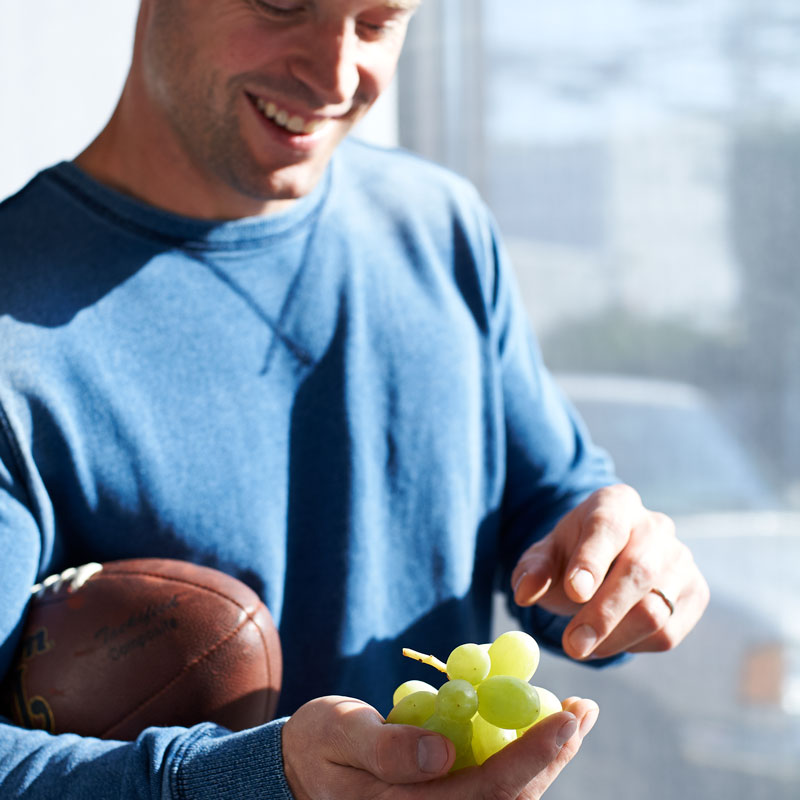 4. A Boost for Colon Health

In a small human study of colon cancer patients4, those consuming a grape-enriched diet (equal to adding 2 1/2 cups of grapes per day for two weeks) were able to inhibit certain genes that promote tumor growth in the colon.  This benefit was observed in the healthy tissue of the subjects’ colons, not the cancerous tissue, indicating a potential role for grapes in helping to maintain a healthy colon. 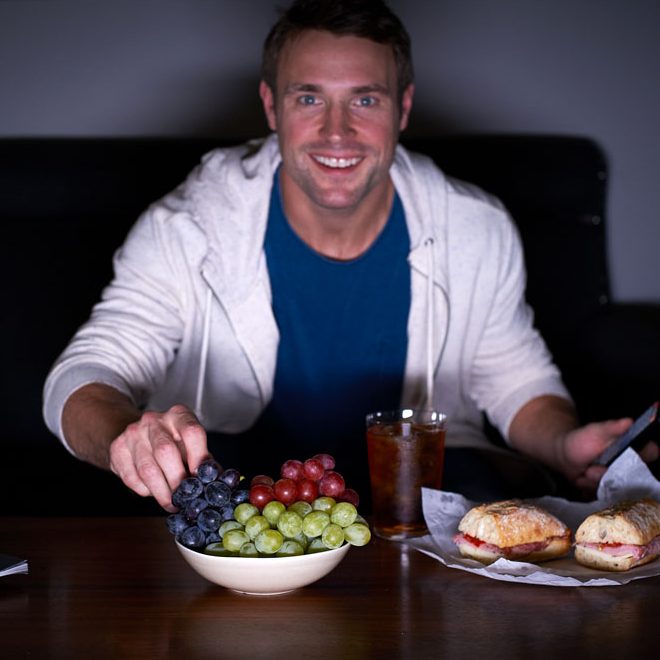 5. All Eyes Are On Grapes

Three recent laboratory studies5 6 7 suggest that regular grape consumption may play a role in eye health by protecting the retina from deterioration.  In the first study, adding grapes to the diet early in life prevented blindness in animals that were prone to developing retinal damage in old age, similar to age-related macular degeneration in humans. In the second study the grape-enriched diet offered protection in multiple ways, from countering oxidative stress, to lowering levels of inflammatory proteins, and increasing protective proteins in the retina.  In a third laboratory study, adding grapes to the diet helped reduce damaging and undesirable blood vessel formation that can leak into the retina and lead to vision loss.

Californians have been cultivating grapes for more than two centuries. Today, 99 percent of U.S. table grapes are produced in California's warm, dry climate that is ideal for grape growing. With 81 grape varieties grown, California grapes come in three colors—green, red, and black—and are in season from May through January.